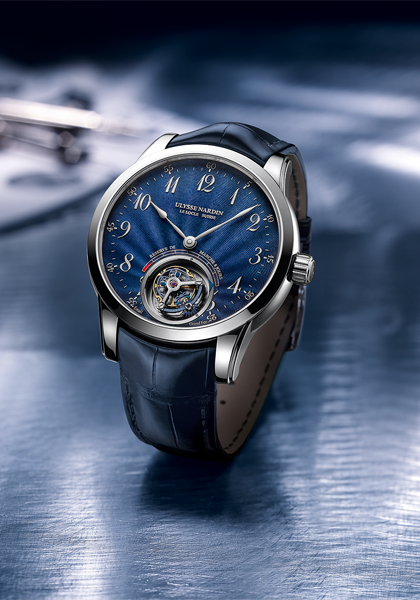 Flowing forward on a crest of innovation, the latest Ulysse Anchor Tourbillon brings with it a cascade of sapphire hues. Inspired by the depths of the sea, Ulysse Nardin delights with the timepiece’s genuine translucent blue enamel dial. An evolution of the award-winning Ulysse Anchor Tourbillon that premiered in 2015, this limited edition in rose and white gold showcases artistic tradition and inventive modernity coming together in sharp – yet beautiful – contrast.

Challenging the traditional Swiss anchor escapement, the Ulysse Anchor Tourbillon was eight years in the making and a world first. Housed in a 60-second tourbillon cage, the watch's architecture is based on the principle of flexible mechanisms, exploiting the elasticity of flat springs. It presents a constant force escapement made entirely of silicium, and features a circular frame with a pallet fork that moves without friction. The pallet fork is fixed in the center and supported in space on two minuscule blade springs. Mounted perpendicular to each other, they are subjected to a bending force that curves and keeps them in a bi-stable state. The result is a positive energy balance that maintains the oscillations of the balance wheel at a constant rate without motor torque influence.

The timepiece's breakthrough engineering revolutionized the power transmission to the regulating system and significantly improved timekeeping accuracy unsurpassed by any other manufacture. Its newest rendition is, without question, equally incomparable.