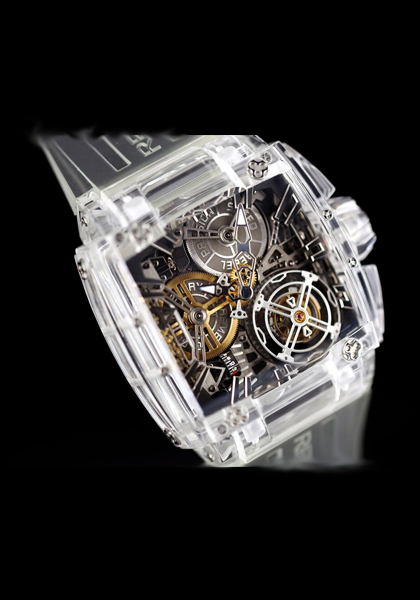 It took 47,600 minutes of diamond grinding, that is 99 business days, to extract the eight elements that make up the case of the 540 Magnum Tourbillon from specially cut sapphire blocks. It was a mad idea that took the magic of transparence to new heights.

Because of the “world premiere” character of the actual encasement, a sapphire box of unparalleled complexity, onje could almost forget the actual content. Well, inside this virile timepiece in XXL size is an extreme mechanism also developed by David Candaux, a recognized maker of movements. REBELLION TIMEPIECES, the only Swiss watch brand boasting its own race car stable, the Rebellion Racing team, has no qualms inviting inspiration from values extant in the world of automobiles: sportive, high-performance, precision and endurance, no compromises allowed…. The rectangular architecture of the REB T-14, with a double spring barrel, immediately catches the eye due to the large size of the tourbillon cage. Here, the mechanism devised by the brilliant watchmaker and physicist Abraham-Louis Breguet (1747-1823) has been interpreted in a most original manner, with finishing and subtleties that testify to an extreme mastery of horological complications. With its 540 tenths of a millimeter circumference and a diameter of 17.2 millimeters – hence the name of the collection, 540 Magnum – the tourbillon pervades the entire dial from its magnesium cage, like a kinetic crater topping an active volcano. Another thing to note is the world's smallest chain, to give legroom to the regulating ten-day power reserve indicator with conical gears. It's a little reminder of the world of mechanical sports.