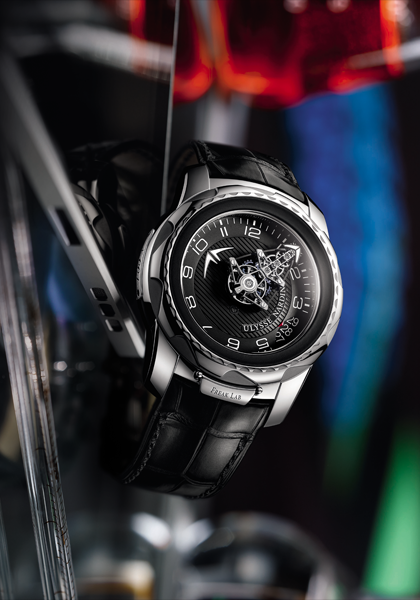 On the new FreakLab, the entire floating upper bridge has been completely redesigned. First, the gear train has been made smaller in order to reposition the balance-wheel and balance-spring at the center of the movement. This operation lightened the dial and made it easier to read the hours. At the same time, the oscillating unit has been equipped with UlyChoc shock absorbers, entirely designed, developed and produced in-house. A classical system comprises five micro-elements: the block, the setting, the jewel, the counterpivot and the spring. With simplification in mind and special focus on efficiency, Ulysse Nardin replaced three of these functions with a single one-piece component made of silicium, a genuine world first which is the subject of a patent application. This solution avoids forces of play and friction, enabling the balance staff to be perfectly recentered in the event of an impact.

Flaunting more of a corsair facade than ever, with an anchor to show the hours and a bridge representing a sail for the minutes, the FreakLab is phenomenally easy to manipulate. A safety clip between the horns at 6 o'clock frees the rotating bezel sculpted in the shape of waves. This is used to set the hours and minutes when rotated clockwise, and the date when rotated anticlockwise. And the mainspring barrel – designed for a power reserve of more than seven days – is wound by the other bezel. Thus the two bezels, front and back, are constituent parts of the movement.